No Credit Where It's Due!

YOUR MONEY! Where is it going and why don't you care?

When everyone is lying about the state of the economy, you get called a doom-merchant just because you ain't pushing green-shoots by the ounce on street corners. Britain has been looted and is continuing to be looted. There seems to be widespread financial holocaust denial in the media. Just how bad is the global economy? The reason no-one can get credit is because everyone has too much debt. No-one believes people can pay it back and people or business don't want any more of it. Brown's answer? Borrow more. Yeh, we should cure Tiger Woods by sending him to a brothel.

Here's the debt picture that no-one talks about. The US economy is connected to every country in the world and in a big way. Britain has a similar problem to the US and is dependent on the US for exports and much else besides. So how is the US debt load looking: 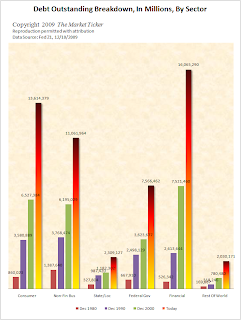 Does anyone in their right mind think that the US economy is going to bounce back? Where does that leave Blighty and check out that 'rest of the world' figure. Why is Scotland not gagging to get out of the bankrupt Britain straight-jacket?
Posted by Alex Porter at 10:17 PM

Alex. Would it be possible to increase the size of the chart ? Too small for me to read the data.

Hey Bob,
There you go fella. If you click on it it will enlarge. Got a bit lazy there, sorry.

I got it from an excellent entry by Karl Denninger here: http://market-ticker.denninger.net/
He has some very good analysis with it - the guy is really bright in terms of finance.

Thanks Alex. Scary graph right enough. I'll go and look at that market ticker site you mentioned.
Did you see the report about globespan being tied in with Allbury travel and E credit ? Due dilligence out of the window again. There's a report in SoS.

Oh and it all seems to track back to Greece. Elite lining their pockets before the country collapses possibly ?

I've been following the Allbury story since you mentioned it. Thanks for the inf on SOS.

The derivatives implosion which is causing these problems really eminated from The City and Wall St. Their 'financial sophistication' was lapped up by banks and finance companies in dozens of countries. Hence the collapse of little Iceland.

If you have the time check out this article by Mike Hudson - he' really is doing a lot of interesting work in this field and is consulting Latvia and Iceland about what to do with all the debt load. He's about the only economist they trust ;) This article shows up how London brought down Iceland and how Brown prevented them from solving their problem. The same issue in Latvia but their problem is with Swedish bankers..