So, what is the reality facing Scots trying to feed families and keep their jobs?

There are very few sources for finding out what's really going on in the British economy. As international investors will tell you though, what happens to the US happens to Britain. And it will probably happen first because Britain doesn't have the delaying cusion of having the world reserve currency.

While many on the blogosphere will tell you not to talk about independence Scots really should be allowed to think about whatever they want. And right now, as Britain teeters on the brink of economic disintegration Scots really should be allowed to think about staying in bankrupt Britain or getting out asap! Obama or Brown or whoever can't do much about it and it was them and some others who got us into it. So, take internet blogs about messiahs with a pinch of salt.

So, what is the truth about the economy of our US cousins? The truth that the mainstream media and the hope peddlars who want to relieve you of your wealth, don't want you to know?

The following article spells it out well:

Economic Black Hole: 20 Reasons Why The U.S. Economy Is Dying And Is Simply Not Going To Recover

#1) Do you remember that massive wave of subprime mortgages that defaulted in 2007 and 2008 and caused the biggest financial crisis since the Great Depression? Well, the "second wave" of mortgage defaults in on the way and there is simply no way that we are going to be able to avoid it. A huge mountain of mortgages is going to reset starting in 2010, and once those mortgage payments go up there are once again going to be millons of people who simply cannot pay their mortgages. The chart below reveals just how bad the second wave of adjustable rate mortgages is likely to be over the next several years.... 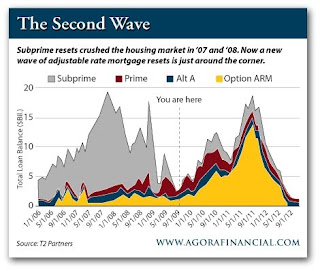 "A huge mountain of mortgages is going to reset starting in 2010, and once those mortgage payments go up there are once again going to be millons of people who simply cannot pay their mortgages. "

I already know people who are being hit by that "second wave" and I know someone who is letting his home go into foreclosure rather than meet the HUGE mortgage payment. He is soon going to be joined by millions of others.

Sorry to hear what your friends are going through.

The second wave doesn't even take into consideration commercial mortgages. Offices and retail properties are leveraged up even more than house prices..

What a sad and sorry mess. I expect the until now passified citizens of your country to become more than angry. Something similar is in store in the UK and in many other countries.

Deregulation under Thatcher/Reagan kicked all this era of greed off. It got worse and worse. They used the IMF to force poor countries to sell off utilities to US/UK/French based global companies and then Clinton, Bush and now Obama are letting the bankers run riot with debt which you'll have to pay for generations.

This all has to come down. It can be tweaked and people will have to be tried and banks will have to be allowed to fail - otherwise the reforms that are required to save your republic will never happen.

I recently came across your blog and have been reading along. I thought I would leave my first comment. I don't know what to say except that I have enjoyed reading. Nice blog. I will keep visiting this blog very often.