The weakness in the propaganda punted by our unashamedly pro-Union press is its partisan division between Labour and Tory.

The first story neglects to mention if it is for economic reasons that banks are seeing profits or is it just down to taxpayers blood transfusions..

The same problem with the second. We just don't know if Brown managed to get out emergency benefits to the christmas present buying masses in December or not, mm.

A cold blast of reality comes from that other unionist tribune. You see there's an election coming and they just can't help Labour out even if it means the horrible 'gnats' benefit:

Tough year in store for retail after a festive 'false dawn'


Stephen Robertson, the director general of the British Retail Consortium (BRC), predicted no growth in consumer spending over 2010 and indicated the recent glut of positive updates from the festive season may represent a "false dawn".

...Robertson said consumers' concerns over higher taxes and the end of many fixed-rate mortgage deals would squeeze spending.

"There will be increasing consumer uncertainty and we will see consumer confidence dropping," Robertson told a Sunday newspaper. "There will be tough sales and perhaps no growth."

So, who's telling the truth? Well, mostly Das Schottishman. Christmas sales and the upswing the 'service sector' is down to money printing. How do we know? We'll it's nothing to do with production because unemployment is going up. Credit is not increasing as the following chart (Ok, It's the US but you can be assured it's the same picture) 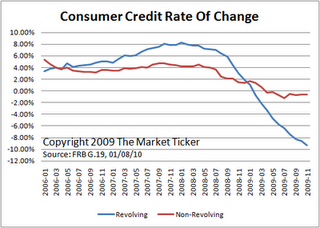 I don't know if you'e seen this via TOD and until MSM start printing the truth the punters will keep believing the old religions.

@CH,
Aye well, they ain't gonnie print it so we need to keep trying to wake folks up through blogging!
Thanks for that pdf!

What I would like to do is start a comments board. Something like www.maxkeiser.com and have people comment on articles. Scotland and the world around us kind of thing. Try to take people away from The Scotsman comment board.. Rest the agenda away from them. If I can get it off the groung before the election.. I'd need a whole bunch of 'editors'. I'm wondering how many folks with blogs would be interested. You got any thoughts on that?
Alex

It needs to get into the mainstream without throwing it into peoples faces. Most economists cant see past capitalism with no idea of what the basic fuel is i.e. finite resources which are in decline.

I have been trying here and some members have blogs of their own who might be able to help you.