We Europeans have been slaughtering each other ever since the genocidal removal of neanderthals by we homosapiens. Isn't it strange that we call people we think are uncivilised 'neanderthal'? I mean we wiped them out. Homosapien history stems then from that original genocide - our real original sin, our template.

And then came the bomb. Nuclear weapons meant that Europeans realised the game was up. We simply couldn't risk war, nomatter how profitable it is, as the elite themselves would be wiped out.

And so we have the European Union and the Euro. Align Europe so that the people don't turn to desperate despots and if we're all in the same boat then there's no culture of envy.

In more recent times we have begun to believe that as the US nosedives into moral, political and economic collapse, with the hands of the corporate elite firmly round the throats of the people and their former constitution, that Europe would emerge as a genuinely democratic superpower inhibiting the corporate takeover of the world through the US's control of the IMF, World Bank, WTO etc.

Now, with countries collapsing all over the place the IMF can step in and offer loans whilst demanding that the country sell its assets off to global companies - mostly US but UK and some other of the usual suspects. And these countries are so desperate that they must be sold at fire-sale prices. And you wonder if the 'crisis' was engineered or not..?

Now it seems the European dream is crumbling:

screams The Telegraph. And The Guardian:

Daniel Roubini is a 'Nobel' (that's not the real 'nobel' prize - it gets to pass off) economist and is a favourite of the establishment said this week:

As the world remains fixated on the financial problems of Greece, Nouriel Roubini warns that Spain is actually a far larger and deadly financial time bomb.

Now, as the US goes down the tubes there's a certain satisfaction in Washington and beyond that Europe may well go down with it. The Euro is starting to become a rival reserve currency. If Greece is kicked out of the Euro the speculators will turn on Spain - capital will flee. They say that Greece was hiding its problems - the fact is that everyone is.

Spain may well bring down the Euro. 5% of all Spanish mortgage holders are now not paying their mortgage. How does this work? Well, if the banks throw people out their houses they have to put those houses on the market and the prices will nosedive. Their asset base will then be shown up to be dangerous and illegally so - insolvent in short. So, mortgage holders are now not paying and who can blame them after the banks have been stuffed with their tax money. This figure will grow until the banks offload their properties and at that point house prices will collapse - there's been no correction like in the US so who knows - maybe prices have anything from a 40% to a 80% price correction to come.

Construction accounted for 40% of all government revenues before El Crisis began. That's gone. 40% youth unemployment and 20% on average are scraping a living. Savings are running out and things are getting desperate. The IMF are predicting contraction but the Spanish finance minister Elena Salgado is pumping out the government line that the IMF is wrong and that Spain is heading for 'recovery'. It's so abused as a word that when a politician mentions the word 'recovery' I imagine them smoking 'green-shoots'.

There's a million empty houses in Spain which is a 7 year supply. In the US there was a housing crisis because they had an 11 month supply..

President Zapatero cuts a rediculous figure lecturing the EU on competativeness. An ex-finance minister developed a twitch in his eye, such was the stress of holding the party line. To make Madrid look busy he has forced councils into highly visible public works. All along the La Castallana statues are being moved, roundabouts 'fixed' and to keep the construction companies afloat he has Plan E; Residents have the delight of having the same piece of road being dug up several times. One engineer I know asked some workmen why they were digging a hole and the answer was they didn't know and that their instructions were to fill it in after they dug it. Meanwhile buildings that were under construction just two years ago remain unfinished, cranes stand quiet and all that cheap South American labour which recently deprived many Spanish tradesmen of well paid work are nowhere to be seen - many are back home..

The good news for Spain is that the Germans have the money printer and not Zapatero. That won't stop him from selling off chunks of Spain to the Chinese and borrowing money. He loves throwing money around - it's his trademark. And that's why the EU was such a good idea. Countries couldn't get out of control and be exploited.

Now though the Euro in Spain is worth about 90 centimos and in Germany 115. The Euro block is diverging and cuts in public services will be political suicide. So, many are now talking about the return to the peseta. For large sums of money the Spanish still think in pesetas and many think they were ripped off when they converted. The Spanish though like being part of Europe. Under Franco the outside world was a long way away. Briefly, they felt economic power and only a couple of years ago they built some skyscrapers in the financial district which, immediately after being built, stand as a monument to the illusion created by debt driven economics - Torre Espacio (below), where I work. 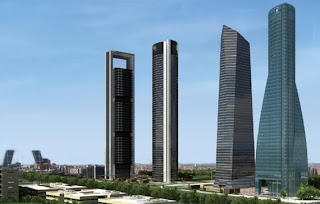 Those aren't giants they're windmills (Cervantes). Unfortunately, they're not windmills - windmills are productive. No, these giants are testamony to the age just past: aggressive capitalism. In Torre Espacio the 'chapel' is on the 33rd floor and from god's vantage point in the Torre you can look down on a wonderful city but a city where begging and pick-pocketing is proliferating, where you can't take a metro ride without buskers competing for your small change and where there are queues at the social security office from 5am in the morning. When you take the train to the outskirsts you see slums filled with gypsies, Easter Europeans and 'sudakas' - the equivalent of 'nigger' for South Americans.

One businessman patted me on the back when Iberdrola took over Scottish Power. "Spain is becoming a powerful force in the world again" he gloated. Every morning I arrive at the Torre and am reminded of the power of illusion. Like Ireland the Spanish bought the capitalist dream.

There was a wizard behind the curtain. The masters of the universe - the global bankers sold them their dream and now having enriched themselves have left an uncertain country behind. It's now starting to sink in that the empire is not coming back and Spain is in deep trouble.

was looking to move fro SW France to Spain and had a look at Mallorca last Spring.

I liked the NW of the island but found the prices unreasonably high.

I then found out that the banks evict nobody because if they did they would have to downgrade the asset value of their estate and the estate upon which is built their balance sheet.

How come they can get that past their auditors?

If they had to revalue would the banks collapse?


When would be the best time to buy?


Sit tight and wait for the flush out but when is that going to happen?

I guess it's sitting it out. You can negoitiate a good chunk off right now and get all sorts thrown in.

Once enough people stop paying their mortgages. That'll choke income and then they'll be trying to get whatever they can before the other banks offload..

Whatever, no point in doing it now. Best renting and sticking money in metals, land and commodities..