Someone yesterday asked me what I thought was the reason why Scotland fares worse coming out of recessions than the UK as a whole.

The problem here is the theology of 'modern economics'. In relatively recent times people began to believe the lie that when the economy went into recession the government should spend money to rescue the problem.

They get addicted those politicians. I mean, if you improve things by government spending then you can do that all the time right? All you need is a money printing machine and the world is you oyster. Isn't it Gordon?

So, they pump all this money into the economy to get re-elected. This drives up asset prices (people saw the house above their heads as investments) and gives the illusion of wealth. The problem is that the money has to come from somewhere. It gets borrowed.

Look at this population v consumer credit graph in the USA from 1970 till today: 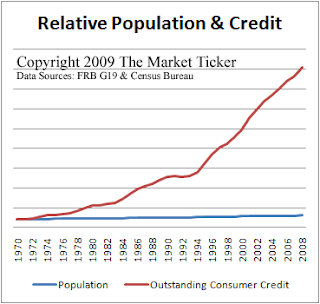 As the government and financial services print and lend more money so the consumer debt expands. More $s in the system has seen massive $ devaluation. You could buy an ounce of gold in 1971 for $35.00, now that would cost you around $1140.00 (that doesn't mean that gold is going up, in means the dollar is going down = inflation or money printing) 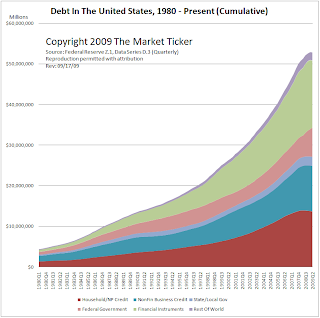 Debt has been driving the economy. The government includes debt in its GDP figures making it look like the country has a positive GDP. If you look more into the debt figures for the US you will see that debt has been responsible for 'growth' since the late 1950s. Britain is probably in a worse position than the US.

What happens is that the government borrows money or allows banks to leverage money and lend you it. You spend it, businesses make money, prices and assets like houses go up and so do salaries. Looks good on the surface, right?

Until we can't borrow anymore.

You see the flip side to this is that we need to borrow from countries with surpluses. Who has the surpluses?

Well, when you drive up salaries and costs artificially by printing money it makes industry uncompetative. So, you export manufacturing jobs (under free trade) to cheap labour economies. Indeed, if you can pay a Chinese worker $2 per day how can an American compete?

So, the Chinese undercut US products and the money flows into their economy. That makes them lots of $. They don't have to spend it on their people so they make huge surpluses. Indeed, they have trillions of $s. They then lend them to the US (at interest) because the US has a deficit because it imports instead of exporting. Mmm, the Chinese lend you the money so that you can buy their things..

Look at this online exhibition by a Chinese pollution photographer to see what our consumer 'bubble' economics done to the Chinese: 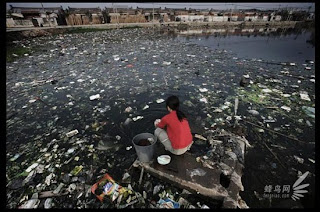 (So that you can keep on partying and living of their credit and labour they get to wash in contaminated rivers. Meanwhile the international bankers get richer)

Eventually the debt gets so large that you can't pay it off from taxpayers money without putting up taxes and cutting services. So, you print it quietly. This annoys China because their $ bonds lose value as you dilute the value of each $.

So, they stop lending. Argggggghhhhhhhh, how do we finance that big budget deficit now? We don't. How do we pay our debts? We can't. It's bankruptcy. Companies close and the tax-take shrinks just as you need more money..

Ladies and gentlemen. The game is over. The countries that grew their debts and became 'finance' economies with no manufacturing are NOT coming out of recession. Think depression. The party was great - all those cheap gadgets; the walkmans, playstation II, another car every year, sushi restaraunts - everything you could throw your many away at. THE PARTY IS OVER.

Brown doesn't want to get it. His problem is that those who were his friends - the bankers - are making a fortune and they don't care about the taxpayer or Brown. He is printing more and more in trying to re-inflate the bubble. The problem is that debt was the problem and so debt can't be the solution. There was too much credit and now it has imploded. It got too much and had to run out eventually. The market is fixing the problem itself. What needs to happen is that the insolvent banks (who got us into this mess through derivatives and then bail-outs and quantative easing) need to be allowed to die. The economy should be allowed to correct itself. The government should leave the economy alone as it only causes more damage. (this has implications for political presentation)

No, the politicians will never accept that the consumer society was all an illusion. They talk about stimulus and recovery. It is a theology. Stimulus will keep us down the rabbit hole longer and there is not going to be a recovery. As they throw more taxpayers money at it so the banks demand more and more to fill their big black hole of $2, 000 trillion in fraudulant derivatives on their books.

Why does Scotland fare worse in recessions was the question? The answer is because we get less of the stimulus and less of the free printed money than the bubble economy in the South. Their distortions are being re-pumped or new ones created and so the short term fix make them look healthy (till the election) but when Britain PLC can't borrow more money on the international markets and the printing press burns out London will crash down to earth with an almighty bang. The UK will be where it deserves to be - somewhere next to Portugal and the oil that made it all possible will be gone.

The people will be broke and extremely angry. The political and banking classes are afraid of that. They are preparing for it already..
Posted by Alex Porter at 2:14 PM

Good dispatch and this fill someone in on helped me alot in my college assignement. Gratefulness you seeking your information.

Heya in dem for the first time here. I came across this board and I in finding It
really helpful & it solved the problem away a lot. I hope which gives one thing
rear and assist others like you helped me.
Here is my web blog - http://www.thespainforum.com/f271/

Youre thereby cool! I dont think Ive read something something
like this before. Thereby cool to search out any person with some original thoughts on this subject.
realy thanks for beginning this upwards. this site is anything that
is required of the internet, someone with somewhat originality.

useful task for providing something new at all to the web!
My site > www.avkymppi.net

Admiring the time and energy you put into your


website and in depth information you provide. It's good to come

across a blog every once in a while that isn't the
same out of date rehashed material. Fantastic read! I've saved your site and I'm adding your

Hi my loved one! I want to say that this post is awesome,

great written and include almost all significant infos. I would

you're doing any unique trick. Also, The contents are masterpiece. you've
done a excellent job on this topic!
My web site > chat.lameru.com


looking for. Would you offer guest writers to write content in
your case? I wouldn't mind creating

I was recommended this website by my cousin.
I am not sure whether this post is written

by him as nobody else know such detailed about my difficulty.
You're

Hey there would you mind stating which blog platform you're working with?

making a decision between BlogEngine/Wordpress/B2evolution and Drupal. The reason I ask is

unique. P.S My apologies for getting off-topic but I had to ask!
Also visit my weblog ; www.ruderwiki.de

hello!,I really like your writing very a lot! proportion we

on AOL? I require an expert on this space to unravel my

problem. Maybe that is you! Having a look forward to


look you.
My homepage ... Www.Culturachianti.it

or copyright infringement? My blog has a lot of unique content

all over the web without my authorization. Do you know any techniques to help protect against content from being ripped off? I'd certainly appreciate it.
my web page - kutitaik.nkat.forum.mythem.es

lengthy have you ever been blogging for? you make blogging glance easy.
The full glance of your site is great, let alone the content!
Here is my homepage ; blackstuds.xxx

You've made some really good points there. I looked on the web for more information about the issue and found most people will go along with your views on this web site.

Feel free to surf to my webpage ... Michael Kors

I think that everything published made a bunch of sense.
But, what about this? suppose you added a little
content? I am not suggesting your information isn't solid., but suppose you added a post title to possibly grab a person's attention?
I mean "Britain's Bubble Economy (Shh, don't tell anyone)" is kinda plain.
You should peek at Yahoo's home page and see how they create article headlines to grab people to open the links. You might try adding a video or a pic or two to grab readers excited about what you've
written. Just my opinion, it could bring your website a little bit more interesting.