It is becoming clearer that Scotland's press is no longer democratic. Das Herald Sturmer and Das Schottishman are both conducting campaigns against SNP politicians based on smear and frothing hyperbole.

Clearly there is an election coming up and the political and corporate interests which control both newspapers and others now believe that they are free to conduct political vendettas.

While the European Union is facing meltdown Scotland's newspapers print leader headlines like:

Nicola Sturgeon's crime was writing to a judge asking for leniency for a constituent who has committed benefit fraud. In the letter (see below) Nicola explains that the man has shown remorse and intends to pay the money back. She then asks the judge to keep that in mind when considering his sentence.

As you can see the letter is balanced, accurate and humane. And yet, for whatever reason Scotland's anti-democratic press has decided to use this to try and bring down the Depute First Minister of the Scottish Parliament. 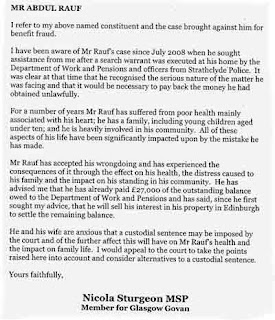 Does this letter merit the hysterical baying for blood that the press headlines have engendered? It is apparent that in the run up to the election the press are going to use any trivial nonsense that they can twist into a 'story' and in a co-ordinated fashion have political attack dogs lined up to heighten the importance of the story from humane to grevious act of misconduct for a Minister of the Government.

A democratic media would laugh this nonsense out of the public court. Indeed, a democratic press would be following up real stories like the charges of fraud of Labour MPs. It would be splashing stories on the possible collapse of the Euro or the possibility of Britain defaulting its national debt.

Clearly journalists and editors have been heavily politicised and are being directed by their corporate/political masters to serve up trivia as shock politics.

We are moving into a dangerous period in our history. With electoral registers going missing in by-elections, with economic statistics no long dependable, with citizens being openly robbed by government to feed insolvent and corrupted bankers, with wars which are casual and no longer make headline news, with balloons spying on the population and so on. Privacy laws in Britain are used to protect corruption in Downing Street, former Prime Ministers accused all over the wold of war crimes are given consultancies with merchant banks (who profit from said wars) of GBP 2.5 million a year..

And Scotland newspapers scream and howl over a constituency letter? It is clear that Scots are not to be allowed an open and honest debate about our constitutional future. Clearly, our national newspapers have been hijacked for political and corporate ends and have no semblance of balance.

Two generation ago Scots saw off Nazis and Fascists and many died doing so. Now the propaganda used by these types of tyrannical regimes is being used on us. The time has come for journalists to make a stand for Scottish democracy and refuse to write this type of odious and dangerous political propaganda.

Citizens must boycott these newspapers and encourage friends to do likewise. If our political institutions can not protect us then we must protect our democracy ourselves. Scotland's newspapers are not informing us but lying to us. They and those who continue to write for them can no longer assume the public's confidence.

Are Scottish political journalists so afraid of losing their jobs that they'll write anything?

Down the ages Scots have died to pass on freedoms. I am ashamed of you!
Posted by Alex Porter at 2:57 PM

Keep your knickers on.

This is the second time this guy has been done for fraud. What was Nicola Sturgeon thinking? Do SNP MSP's walk around with cotton wool for brains? Look at John Mason and Christine McKelvie and their defence of convicted fraudster Fatou Felicite Gaye. Is there some predilection for fraud in the SNP?

It's a woeful error of judgement from Sturgeon, not the press.

Is it normal practice for courts to release confidential letters to the media.

The rumour that this was released by Donald Finlay needs to be vigorously pursued. It has to be illegal?

Well said sir . I do not think the real nasty stuff has begun yet, when the SNP had 11 mp,s at westminster realy realy bad stuff took place.

Excellent article. People protests are going to be necessary to get the unionist media under control.

The sooner the better for me.

I agree with you.

But gonnae gies a brek fae the Das Herald Sturmer and Der Schottischman pish. We can plainly state that the Scottish print media are an arm of the, hopefully dying, Labour-in-Scotland-one-party-state without implying there's something Germanic about this.

Suggesting anything other than jail time for a fraud of this size when it is a second conviction is a serious error of judgement. As a taxpayer I'd be shocked if he wasn't jailed.

In fact this story was the last straw after other SNP policies like abolishing short sentences, increasing supermarket alcohol profits, and over reliance on "green" energy. I'm now in the odd position of supporting independence but not the SNP.

There really is no doubt that Nicola Sturgeon's letter is the sort of compassionate plea that a democratic society should expect from its parliamentarians.

Anyway, I agree with the anonymous commentor below that the SNP have not really come through in terms of policies.

They simply have to stop parading themselves as devolution managers and get on the campaign trail.

They're forgetting what politics is about and getting sucked into the sensationalist agenda that is British politics. There are other ways to push for independence but as a voting vehicle it's really all we have. So push for change is the answer. I mught be wrong..

She didn't ask for leniency, just an alternative to a custodial sentence and if the judge hands out a huge fine and a lengthy community service order then it will actually be cheaper for the taxpayer than locking him up. In fact they might even make some money off the whole affair.

What a great resource!