Securing UN 'formal approval' the Yanks landed thousands of marines. No need to ask the Haitians you understand, so they didn't.

What kind of man would you consider best equipped to lead the 'relief effort'? Why an ex-president who had President Chavez kidnapped, who started illegal wars resulting in millions of deaths and who used the World Bank, IMF and WTO to force poor countries to sell off state assets very cheaply to global corporations all run by his mates. So, Obama appointed Bush to relieve; relieve the country of its freedom, oil and land.

As pointed out by John Pilger in his article for The New Statesman entitled:

The kidnapping of Haiti

..Not for tourists is the US building its fifth biggest embassy in Port-au-Prince. Oil was found in Haiti’s waters decades ago and the US has kept it in reserve until the Middle East begins to run dry. More urgently, an occupied Haiti has a strategic importance in Washington’s “rollback” plans for Latin America. The goal is the overthrow of the popular democracies in Venezuela, Bolivia and Ecuador, control of Venezuela’s abundant oil reserves and sabotage of the growing regional cooperation that has given millions their first taste of an economic and social justice long denied by US-sponsored regimes.

And another corporate-controlled ex-President gets to make an appearance to. Yeh, Clinton got in on the trough action via the UN reports Pilger:

Bill Clinton is another comedian, having got himself appointed the UN’s man in Haiti. Once fawned upon by the BBC as “Mr. Nice Guy... bringing democracy back to a sad and troubled land”, Clinton is Haiti’s most notorious privateer, demanding de-regulation of the economy for the benefit of the sweatshop barons. Lately, he has been promoting a $55m deal to turn the north of Haiti into an American-annexed “tourist playground”.

Those who see the world through the lense of the corporate media will no doubt call me a cynical lefty. Obamanoids will scream that it's all about aid. Aye, them drinking the Kool-Aid.

Perhaps a scour of the immediate response to the crisis as it emerged would throw up some evidence of malintent. Some observations by world famous investigative reporter Greg Palast:

- Bless the President for having rescue teams in the air almost immediately. That was President Olafur Grimsson of Iceland. On Wednesday, the AP reported that the President of the United States promised, "The initial contingent of 2,000 Marines could be deployed to the quake-ravaged country within the next few days." "In a few days," Mr. Obama? 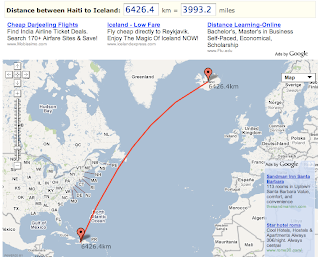 - Send in the Marines. That's America's response. That's what we're good at. The aircraft carrier USS Carl Vinson finally showed up after three days. With what? It was dramatically deployed — without any emergency relief supplies. It has sidewinder missiles and 19 helicopters.

- But don't worry, the International Search and Rescue Team, fully equipped and self-sufficient for up to seven days in the field, deployed immediately with ten metric tons of tools and equipment, three tons of water, tents, advanced communication equipment and water purifying capability. They're from Iceland.

- Gates wouldn't send in food and water because, he said, there was no "structure ... to provide security." For Gates, appointed by Bush and allowed to hang around by Obama, it's security first. That was his lesson from Hurricane Katrina. Blackwater before drinking water.

The first thing we were told was that there was no rule of law and looting was widespread. Hence the narrative justifying army, special ops etc. As pointed out by Pilger the initial reports played a huge rule in terms of couching the history of events:

Power rules in an American naval blockade and the arrival of 13,000 marines, special forces, spooks and mercenaries, none with humanitarian relief training.

The airport in the capital, Port-au-Prince, is now an American military base and relief flights have been re-routed to the Dominican Republic. All flights stopped for three hours for the arrival of Hillary Clinton. Critically injured Haitians waited unaided as 800 American residents in Haiti were fed, watered and evacuated. Six days passed before the US Air Force dropped bottled water to people suffering thirst and dehydration.

The first TV reports played a critical role, giving the impression of widespread criminal mayhem. Matt Frei, the BBC reporter dispatched from Washington, seemed on the point of hyperventilation as he brayed about the “violence” and need for “security”. In spite of the demonstrable dignity of the earthquake victims, and evidence of citizens’ groups toiling unaided to rescue people, and even an American general’s assessment that the violence in Haiti was considerably less than before the earthquake, Frei claimed that “looting is the only industry” and “the dignity of Haiti’s past is long forgotten.” 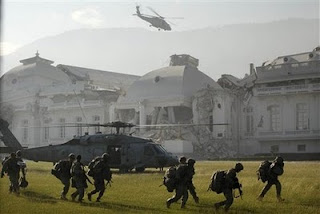 Excellent article Alex and a subject I've been watching for some time.

Don't forget Clinton got his share of the photo-shoots too.