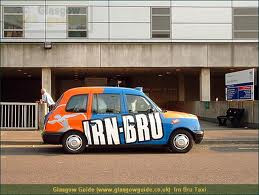 There's something about Glasgow taxi drivers. Maybe it's the fact that my mother was the second woman in Glasgow to get a hackney license. She knew the city like the back of her hand and she had no time of day for day traffic - she was nightshift!

Oh aye, I remember my heroic, single-parent mother out there all night earning a "man's wage" in 70's Glasgow and when I got in the way she sometimes had me sitting in the little cabin next to the driver's seat and under the metre. I think I helped her pull in some tips. Taxi drivers have cash and so nothing was ever planned and I ate out of chip shops, Chinese, Italian and Indian restaurants and unlike my friends who had things, I had cash.

The stories and the characters. 'Chippy Tam', the obese Glasgow Italian who owned a fleet of taxis had a canteen where the city's cab drivers met up. If you needed a sub, 'The Chip' was the man. I remember the stench of diesel, colourful stories about celebrities in the cab or what happened to patrons who didn't want to pay and characters with nicknames like 'Scottish Soldier'. Taxi drivers were ex-squaddies, ex-shipyard workers, ex-everything. They knew politicians, prostitutes, cops, ex-cons, journalists, bankers, gangsters etc. Needless to say they knew the score. If you talked to a Glasgow taxi driver you could hear opinions about the provost, the shipyards, the world war, the Spanish civil war, capitalism, Muhammed Ali, John MacLean, Raging Bull, Ally MacLeod, Nixon, OPEC and the Bay City Rollers. You didn't want to end up on the wrong side of them but they were interesting and a vital part of an amazing city.

Which brings me to this story reported on Newsnet Scotland:

Now, if I remember anything about Glasgow cab drivers it is that they really despise private hire firms. Why? Well, while the 'hacks' are out there scowering the streets for business with their 'begging lights' on, the private hire lot sit around waiting for a call. And in so doing the hacks get to know the city inside out. I remember all sorts of stories about how my mother would drive along a certain road just as a certain office closed and she would be 'flagged down' and got a good fare to the airport and maybe even a hauf-decent tip into the bargain. It's a matter of honour and service.

So when in August this year every taxi driver in the city of Glasgow signed a petition against the awarding of Glasgow City Council contracts to private hire firms you can bet your house that the 'hacks' are more than just a bit hacked off!

Just to help you understand the intensity of feeling that is involved here I'll tell you a story: Once upon a time there was a turf war between 'hacks' and minibuses. The minibuses were picking up punters and taking them to the bingo and this didn't enamour them much to the 'hacks' but "all's fair in love and war" as my mother used to say. However, one night two minibuses off-loaded their patrons at the bingo and decided to go for a cup o' tea whilst waiting for the end of the bingo session and thought it would be a hoot to trap a parked taxi between them. That night both minibuses were petrol-bombed. I won't say how the addresses of the minibus drivers were procured or who the taxi driver was but you get the point; hackney drivers don't take to being shafted kindly and they're resourceful.

The private hire firm called Network Private Hire saw Strathclyde Police lodge objections against their license applications this month on the basis that a convicted criminal, James Baxter, held shares in the company. This week Mr. Baxter left the company.

Councillor Todd was recently made Chairman of 'City Building' - a company that was recently at the centre of the corruption allegations that surrounded the former Labour council leader Stephen Purcell who has admitted taking cocaine and who, it is believed, was thought by police to be vulnerable to blackmail by gangsters. As you would expect, calls for an investigation into corruption were blocked by Labour and Lib-Dem councillors. And on top of all that, the same firm has secured exclusive contracts by the BBC and the NHS (no Labour influence there is there?).

Now Councillor Todd is threatening to take legal action against SNP Councillor David Turner (who maybe having one or two sleepless nights) for the latter's allegations made in the council chamber. I imagine this will all be swept under the carpet by the unionist media and no legal action will be taken but there's one constituency that's being overlooked by everyone. No silly, not the electors but the taxi drivers.

In a City where Labour rules supreme, suddenly they have a formidable enemy - Glasgow's taxi drivers!

For decades the SNP have pondered over how to get a foothold in Glasgow. The City's tabloid The Daily Record is a loyal Labour propaganda organ and there is a revolving door between party members, trade unionists, media outlets and jobs in the public sector. Indeed, I can remember in the early nineties the wife of a trade-unionist securing a job as a secretary in an 'Unemployed Workers Centre'. She drew a healthy salary and typed with two fingers..

Could this open up a new front for the SNP? If I were an SNP councillor or activist in Glasgow, I'd be handing out a dossier on Labour's council corruption every time I took a taxi. Taxi drivers have friends and they talk to their punters. The nationalists have an opportunity to turn Glasgow taxi drivers into an activist base which is far more potent than those party members who have leafletted Glasgow's constituencies over the decades (like me) with no hope of winning.

And perhaps drivers could be convinced to support the new Newsnet Scotland online newspaper which was set up to counter-balance the unionist bias in Scotland's press and broadcast media. Just a thought.

As this story heats up, and it will, I'd bet on Glasgow's hackney drivers throwing some diesel on the flames. Care must be taken as this is local Glasgow politics but handled correctly this is a huge opportunity to help loosen the iron grip that Labour has on the city.

Taxi for Labour!
Posted by Alex Porter at 10:34 PM

Lovely post Alex. I'm sure those in the glass tower of the SNP will take note.

Alex, I remember this story on 'Facebook' about 3 weeks ago and let me assure you that the SNP people on my list are well aware of it. You may or may not know, however that 'your man', Councillor Todd, actually drives for the Taxi ompany in question, which has just been awarded the bulk of the Glasgow contract depite the fact that the council has banned them from council business bcause of their drug connections. The ban is however under appeal, so that lets them continue to do council business. You couldn't make it up!

'For decades the SNP have pondered over how to get a foothold in Glasgow.'

" Glasgow's hackney drivers throwing some diesel on the flames"

Hope not. Diesel doesn't burn - needs to be forced under pressure to get energy out.
But a good article Alex.
It doesn't surprise me about the BBC ignoring the story. Jackie Bird etc write for the Daily Record. Even the football programmes on BBC radio hammer away at the SNP.
I always wanted the SNP to speak up about all the bias and highlight the corruption but it has never happened. The only conclusion is that the SNP aren't interested. They have power and don't give a monkeys anymore.

Some good stuff here for you to read ref 'climate scam'.

A conversation I had with a Hackney driver about the trade ended with me laughing hysterically and him shouting, "its f****** true man." The hysteria took hold of me when he said,"and another thing, see these bas***** on skate boards,they should be banned in the city, they are doing us out of business, I see the fu***** skating home at night after being in the pub." Nuff said.

@subrosa,
Thanks. You would think the SNP would just accept that they're going to get a bad press anyway and get on with it..

@Bob,
It's not that they don't care, I think they genuinely don't want to get dragged into local corruption scandals. And even if they wanted to what could they do? They have no authority..

Thanks for the climate stuff!

@Key Bored Warrior,
It's a lonely job the taxi game;)

They do talk about crime and corruption. They have repeatedly raised organised crime in the Chambers, in the Parliament and everywhere else. Labour don't even bother to turn up. The SNP brought Kenny MacAskill to Glasgow for a summit - the police and other agencies turned up, only one Labour councillor showed face.

None of it ever gets reported. The Evening Times is GCC's in-house paper basically. They never carry anything positive about the SNP, only negative stories.

Then people like Bob say the SNP has never spoken up about anything. It's quite sickening really - it's not just about coverage in the press. One of our councillors had to leave Glasgowm for a while because he was in danger because of his campaigning on the Chirnside situation.

But c'est la vie I suppose.

This site was... how do I say it? Relevant!! Finally I've found something that helped me. Cheers!

Have a look at my homepage more